NEVER EVER GIVE UP.

As I prepare to step outside my comfort zone and run my first ultra-marathon I am constantly looking for motivation to help get me past the inevitable psychological barriers that I will face during the race. 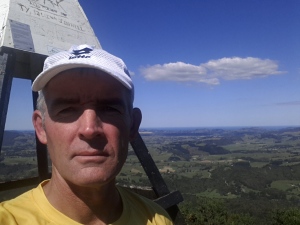 Earlier this week I spent an afternoon with some clients, Stuart and Helen, who have recently been dealt a massive hammer blow on top of the already forecast low milk returns. Their positive attitude is infectious and when most people would have given in they have taken up the challenge head on.

This couple milk 320 cows on a leased dairy farm on some tough North Waikato soil which harvests around 9 tonne of pasture in a good year. The word drought means normal summer and a bit of grass in January is a luxury. The rental they pay is well in advance of what the returns for the land can offer but they were pressured into paying the price three years ago when options were low and time was short. Such is the roll of the farming dice. This year their lease will cost around $2.15/kgms which in itself is a blow given it is dead money to them because it does not service their own land debt.

Then this season a sledge hammer struck. Stuart became very ill and was finally, after a long delay, diagnosed with aggressive form of Sarcoidosis, a debilitating disease which affects the lungs and suddenly without notice he was removed from actively taking part in the daily running of the farm. On top of a high rental they now must employ a farm manager on full salary as well.

We have worked a lot together over the past couple of years on personal growth,  and discussing the benefit of health and fitness so now when some people would have throw in the dice these two refuse to do so. Helen has taken up a level 5 ITO course to enhance her business skills and now informs me that she has entered the Surf 2 Firth Bush half marathon which is probably the toughest running challenge of that length anyone can undertake. Stuart is beginning to understand his disease and slowly learning to cope with the side effects of the drugs and now, rather than wallow in self-pity, is walking up to 8 km per day, sarcoidosis and all.

There is a long way to go but the message here is simple. The mind is stronger than the body. There is always another way and another day. Times will get tough and you will wonder how you will ever get through. Your attitude toward your situation is half the battle so having a positive focus outside farming can help you get through tough times, so as I prepare for my first ultra-marathon in February I will use this couple as motivation to keep going when I think there is no hope left.